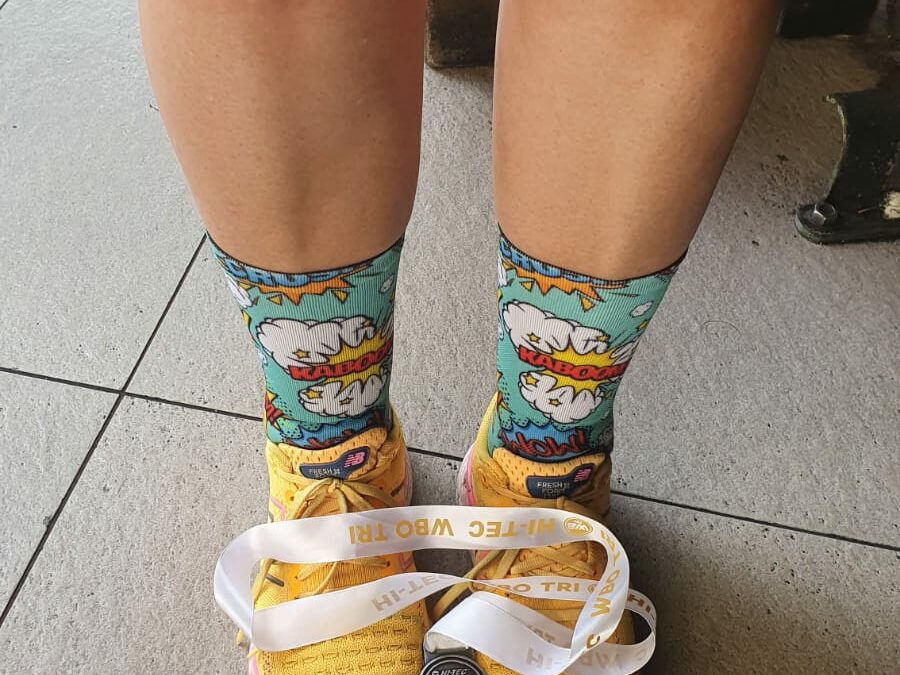 The Walkerbay Outdoor Sprint Triathlon was my 2nd event for the year, and one that I was really looking forward to:

Faz and I travelled drove through to Hermanus for two days of relaxation, walking, talking and tanning before Race Day Monday. Armed with cozzies, snacks, books and all my race kit, we arrived at the delightful Auberge Burgundy at the Old Harbour in the afternoon. I was too late to collect my race number, and with my busted back wheel I couldn’t do my planned 10km cycle, so we went for a long walk along the scenic cliff path, checked out Fick’s Pool, and stared at the ocean.

Which was a mistake…

… Because it was clear that the sea was rough, the swell high, and a quick swell forecast check – courtesy of The Husband back home – showed no improvement over the weekend. Cue a small panic attack, visions of drowning, and poor Faz having her hands full with a rather dramatic baby triathlete who hasn’t had an ocean swim in years.

Being a nervous eater – one of the reasons why I struggle to be rich and skinny – the hearty meal at Burgundy Restaurant did wonders to quell my fears for the evening.

Sunday arrived and we had a full itinerary, starting with a quick 3km leg loosening run before breakfast, followed by race registration and more relaxing pursuits. I had a good 3km and started feeling confident for Monday.

Arriving at race registration, I was handed a race number. No swim cap. No more information on the event. No clarity on the sea conditions, other than that the Swim-Run-Jump event had gone ahead the day before. I asked to see the route map and was directed to the glass door where various maps were put up. There was no sign of the tri routes so I left feeling confused.

Meanwhile, I had also taken my bike to GET Cycling, the local bike shop that generously offered a free bike check for all triathlon participants. Here they informed me that not only did my back wheel have a hole in the tyre wall, but the salesman at Sportsman’s Warehouse sold me the wrong sized tubes the day before, despite me showing him my wheel and questioning the tubes in question. So what started as a “please help me change my tubes because I’ve been trying to get one tyre off the rim for the duration of Taken 2 on TV, and my lady hands are clearly not strong enough” ended with me having to buy a new tyre and two new tubes. My eyes got a little sweaty at that point, because I envisioned spending my cash on a ton of books at Quirk and Leopard, not on extra stuff for my bike. I’m sure the guy at the cycle shop saw the panic in my eyes and covert logging into my bank account because they actually went back to get me the cheapest, entry level tyre, AND gave me a participant’s discount. Cue happy smiles and extra cash to buy some awesome books.

A nap by the pool, more walks, and me finishing “The Viscount Who Loved Me” (cue heart-eyes) rounded out our lovely pre-race Sunday. All that was left for me to do was toss and turn in bed with more visions of drowning, wondering whether this would be a good time to design the PowerPoint presentation for my memorial service and quickly jot down things like passwords, PINs and instructions to clear my browser history…

And then it was Race Day. I grabbed my bike, wetsuit and transition box and headed to the start at 06h30, where one of the TSA officials informed us that the swim had been cancelled for safety reasons.

I’ve never seen a group of people so relieved, and it felt like a massive weight had been lifted off my shoulders.

After the usual bike checks, I went to set up my transition spot and took my wetsuit back to my room. The event was turned into a duathlon instead, comprising a 5.6km swim, 23km cycle, and another 2.5km run. I mean, how difficult can a duathlon be?

As it turned out… a duathlon is actually much harder!

Run 1 took us out along the coastal road and back to T1 along the fabulous and quite spectacular cliff path. I was positioned among the back markers, which I expected, but lo – I felt like I was flying! This was undoubtedly my best run since I graduated from walking in January to run/walking in Feb, and I didn’t feel like walking even once. In fact, I only walked two or three sandy and uneven cliff path bits because I didn’t want to snap an ankle – I even passed some runners.

Next up, the 23km cycle. I’m normally not a fan of loops, so good thing I didn’t know about the looped route until race briefing. There was no road closure, but they coned off a middle lane for cyclists, and thanks to the excellent support by the traffic police and marshals, I felt relatively safe.

The turnaround point at Grotto Bay came with a surprise short and sharp climb and I struggled with my gears on the first loop, but I was totally prepared for this on the second loop, so I flew back home to T2. Unfortunately the bad part of being in the back is that marshal attention may not be as on point as with all the other participants, which resulted in me almost knocking over a pedestrian who was taking a slow stroll right in my way. Sorry for shouting, random lady; I didn’t want either of us to get hurt.

Knowing that 2.5km of running stood between me, the finish line, and a chocolate Steri Stumpie and breakfast, I gunned it for the 1.25km turnaround mark. Except, it wasn’t the turnaround and the marshals told me to keep going. Now, this is not what I wanted to hear. I mean – I was physically and emotionally prepared for a bloody 2.5km run.

Turned out that our 2.5km run was actually 3.9km, at which point my body went into full protest and I could hear my legs scream “this isn’t what we signed up for!”

But somehow this made finishing even sweeter, and I still had some energy to spare when I crossed the finish line.

After a quick roadside catchup with Coach Frank and the always perky Vicky from Stellenbosch Tri Squad, I finally got my Steri reward and wolfed down breakfast before starting the long journey home.

Route Profile: Mostly flat and fast. I’m glad the swim was cancelled because the sea was rough, and I wouldn’t have felt confident doing that loop into the old harbour, while contending with hectic swells, foamy waves, and dodging rocks.
The Good: It’s a spectacular route, especially the run. There’s also quite a vibe and to finish within the heart of town with loads of people milling about was really cool.
The Bad: No swim cap. No water points anywhere on the race (I would have liked to receive clear comms around this as I would have then planned to fuel better). I found the athlete communications lacking. Due to the nature of the swim, I would have appreciated the option to attend a swim familiarisation session over the weekend. Considering that the event is marketed as being perfect for beginners, this is something that must be discussed with the See & Sand team and considered for next year. I do appreciate that the team is utilised to marshal at the other events over the weekend, so an alternative would be to shoot a video about how the swim entry and exit would work, as well as how to tackle the swim, to share with participants beforehand.
Value for Money: At over R1,200 (incl temp license), it was incredibly expensive for a sprint triathlon. Add to that fuel, food and accommodation, it’s a hefty bill. But I feel better for turning it into a girls’ weekend away with a friend than driving in and out on the day.
Did I meet my race goals? Hells to the YES!
Will I do it again? I’ll definitely think twice due to the price and perceived value for money. I do understand that things are much more expensive when an event doesn’t have a multitude of sponsors. And while this event is definitely something that needs to be experienced, but my budget forces me to be more picky.